My heart is broken right now, but Paris will rise. Condolences to those whose loved ones were barbarically murdered. And much love to all Parisians who are sad or afraid. America stands with you. 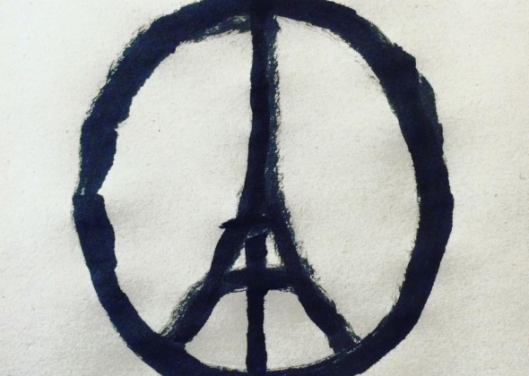 Tonight I have a very good meal at tiny Bonjour Vietnam in the Latin Quarter. I can’t figure out what a Bonbun is (their specialty), nor could the waiter describe it to me. I run into this frequently. They have a menu with English translation, but there are still specialty words that you don’t understand, and they don’t speak English. The waiters usually point to the menu in this case like you’re an idiot, and say, “It’s in English!” I have to laugh, though. A couple walks in a few minutes later, and wants to order carryout. Even though she’s speaking French, I can tell the woman asks, “What’s a Bonbun?” It definitely does not register with the waiter that this is also what I wanted to know.

So instead I have the crispy duck with ginger, orange and cilantro. Excellent, very flavorful and not drowning in sauce. I’ve found much of the French food here to be rather bland, so I’m glad to eat something with strong flavors. The restaurant is also cute inside. It even has much more comfortable chairs than the typical French bistro. But I pass on dessert, because I don’t remember ever having had a good dessert at an Asian restaurant.

Besides, just around the corner is Aup’Tit Grec, the amazing street creperie on Rue Mouffetard, and I’ve been intrigued by one of the crepes on their menu: Nutella, Banana, Coco and Grand Marnier. So I head over there, and for the first time ever, the line is short. Probably because it’s 10:30pm and the dinner crowd has thinned out.

Now, if you’ll recall, last time I was there, I distinguished myself by giving the chef 20E and leaving, thinking I had given him 5E. He had someone chase me down the street to give me my change. He’s honest, that P’Tit Grec, and truth be told, intelligent and rather good looking.

Well, my stupidity last time at least made me memorable. When I walk up I can tell immediately that he recognizes me. He says, in English, “How are you tonight?” and smiles. I tell him I was thinking tonight I’d give him 40 Euro. He laughs. So I order their high-end dessert crepe. He starts skillfully preparing the crepe. Damn that Nutella looks chocolate-y and fine. But then he adds the rest of the ingredients, and I’m wondering what the white flakey stuff is. And I suddenly realize that “coco” is not cocoa. It’s coconut, and I dislike coconut. But I just decide to go with it. It’s already on the crepe, and besides, I was a “problem customer” the last time. I hand him a five, and say in French, “This time it really is five.” He laughs again and flashes a big smile. It’s a nice smile. His teeth are very white.

Sometimes you can re-try things like coconut, and sometimes they’re all right. In fact, better than all right. This crepe was flipping fantastic. Women frequently compare dessert to sex and I usually think it’s a bit crude, but tonight I was Meg Ryan, saying “Yes, yes, yes, yes, YES!”

Except I wasn’t faking it.

I now might be just a little in love with the chef. Anybody who can make a dessert that amazing must be husband material.

I also feel like after having crepes here, I can never go back to the sloppy falafels in the Marais. I know the falafels there are legendary. In fact, they fight over “falafel claims” at the many falafel stands there, i.e., “Best on the Street,” “Best in the World, ” etc. And I do think the falafels might be a bit more healthy. But they’re nowhere near as delicious as the crepes. Nor do I think the guys at the two falafel stands I’ve tried are nearly as nice as the guy at Aup’Tit Grec. He also spends more time preparing the food, and you can taste the difference.

If you come to Paris, you’ll see people walking all over the Latin Quarter and the Marais with street food. You should use the natives as your guide: if they love it, you should at least try it. (Well, other than macaroons, which are gross.) You won’t be sorry about the street food … some of it is sublime, but all the street food I’ve tried has been quite good.

Okay. So I’m a woman. A woman who could not resist the allure of The Museum of Chocolate. It beckoned …

Found an area of the Marais that appeals more to my fashion sensibilities. Rue de Rosiers and the little streets surrounding it. More chic and not full of cheap clothes. I love bargains but I hate cheap quality. Get off at Metro Saint-Paul, cross over Rue St. Antoine/Rue Rivoli walk a few blocks to Rue du Temple Vielle, and head into the Marais.

This area of the Marais is full of casual clothes that have something interesting and unusual about them. The prices are not cheap but also not horrible. Most of the items fall into the $50-$300 American range. I am relieved to find clothes that have a little more classic chic going for them instead of the endless boho and French country aesthetic I’ve been seeing in stores elsewhere. I’m just not a wholesome winsome peasant-y type. I need something with edge and a little tailoring. And no sleeves; I’m hot, y’all. Literally.

I’ve been reluctantly shopping the soldes (sales) because I just didn’t pack properly for summer in a steam room. It’s the end of the summer season, so it’s not that easy to find stuff, particularly since I’m at the outer limits of normal sizes for Paris. I really didn’t want to spend tons of time shopping in Paris. However, I have to admit, the little purchases I made are already helping me to cool off and giving me options since I’ve been changing my clothes three times a day due to the heat.

Just a little thing you should know. I love giving my business to the little boutiques. And this area is all little boutiques. But there is a down side, particularly if you are a giant American size 10 (XL in Paris).  Sometimes the stores have fitting rooms that aren’t exactly modest. So you’re stuck in a makeshift curtained closet with drapes that don’t even completely close and no mirror. Meaning you’ve got to parade out of the dressing room in something that likely makes you look like a cow for the rest of the world to see. Ugh. And moo. Not to mention the shops are mostly not air conditioned. Put yourself in a tiny curtained area and it’s even hotter. But I digress.

Coatz ze (Coatzze?) Boutique, 21 Rue du Bourg Tibourg – This store had impeccable, beautiful, unusual clothing. There was not a single item that I did not think was chic and amazing. Unfortunately, it’s a small store, and she was out of almost all her summer stuff already. What remained was either a size 2 or fall clothing. So I bought nothing, but I would definitely DEFINITELY recommend this shop.

Minsoo, 18 Rue des Ecouffefes, a new store with very original Japanese-influenced clothes and a sweet, helpful woman who was either the owner or the manager.

Cecille Jeanne, a French designer who makes lovely jewelry and unusual purses. Two stores in this location, one more jewelry focused, the other more bag focused. Prices from about 50E to 200E.

Crea Concept, 2 Bsi Rue des Rosiers, chic and casual knits and synthetics. A very nice salesgirl waited on me and helped me with my French, thank you!

Also on Rue Rosiers there are fabulous street falafel dealers (and it isn’t far from an Amorino’s gelato location. I’m just saying).

This video sums up how I feel exactly. Worth watching. Somehow he manages to combine outrage with humor. He does use a lot of profanity, and, in this case, it’s never been more appropriate. Unfortunately, WordPress does not support video unless you pay a hundred bucks more, so I’m linking to it. It is a safe link.

Yesterday, I made the acquaintance online of someone who’s spent a lot of time in France.  He insisted that Parisian …

Air France does not allow you to have an eBoarding pass sent to your phone. So if you don’t have …

My niece wanted me to take a photo of myself at the Eiffel Tower. Here I am, pre-French haircut. It …

Okay, so I went back to Pére Lachaise, one of my favorite places in Paris. While I was there, an …

Since I leave Paris at the crack of dawn on Saturday, I doubt that I’ll be posting much until I …

The Musée Carnavalet in the Marais and the Musée Jacquemart-André in the 8th were a lot alike to me. Great …

It’s difficult, in short. If you rent an apartment here, it isn’t nearly as easy to receive pages as it …