We hop on the Metro and head on down to the Bastille Day fireworks at the Eiffel Tower, thinking we’re smart to avoid the Eiffel Tower stop and go to the nearby stop at Ecole Militaire. Alas, the French have closed that stop, too, so we’re forced to get off at the stop at La Tour Maubourg and walk about 20 minutes to the Tower. Other than my aching, blistered feet, this wouldn’t have been too bad. There were crowds of other people walking with us, and they weren’t very polite, I’ll admit. If you slowed down, they’d just as soon trample you. But we get there around 9:30, and my memory has served me correct. There are paved concourses at the Eiffel Tower but also large, grassy areas.  We opt for the grass.

People are sprawled out everywhere, on blankets, picnic style, with food and wine. We get yelled at by some French women for taking a space behind them, so we keep moving until we spot an even better area in front of a baby carriage that doesn’t appear to be blocking anybody’s view. It’s a beautiful night and most people are in a great mood. The Tower glows a stunning amber color, periodically alternating with a sparkly, traveling white. The way the Tower is lit is a triumph in and of itself … I felt like I could see every buttress. Really, the amount of detail visible from afar is astounding.

The opera concert floats out over to where we’re sitting. When they sing the national anthem, many people around us sing along. I’m bummed that my “record” button on my iPhone leads me to believe I have recorded that, but I missed it. Damn.

It stays light here until about 10:30 at this time of year, so the fireworks don’t start until 11 pm. The beginning is a little slow. The display is rather low on the tower. Amy has read somewhere that the beginning is designed to represent the storming of the Bastille, which makes sense, since all of the fireworks at this point are red, white and blue. The Tower is integrated into the light show, switching colors and augmenting the display every step of the way, often pulsing. The searchlights at the Tower’s top beam out and rotate.

Then on to higher and prettier fireworks. Pretty much the same kind of fireworks you see anywhere, but elevated due to the inclusion of the Eiffel Tower as part of the display. I like that the French have also stayed away from crazy colors … everything is classic and coordinates with the Tower. Music selection is a little strange and often features American rock. At one point, they played “Living in America.”

Fireworks go on for about 45 minutes, with the Tower leading the way and bathed in various color schemes from pewter, to red, to red/white/blue to a rainbow. There’s a nice breeze, and it’s neither too cool nor too hot. Then, too soon, it’s over. Everyone applauds and walks the long path back to the crowded Metro station. We wait about 10 minutes, employ our new French crowd skills to wiggle into the line. Then we’re on the train back to the apartment, feeling lucky we could see this in our lifetimes. 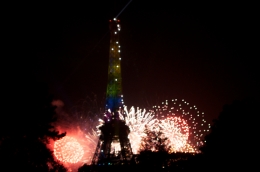 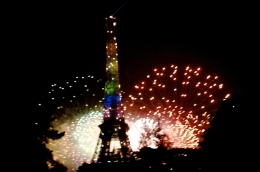 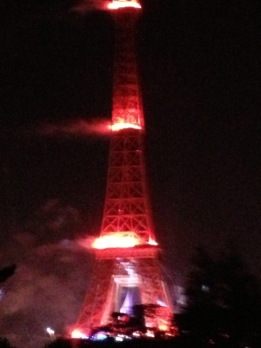