I’ve been procrastinating on going to the Louvre because I just knew it would be a big whoop-de-doo, and I thought I’d hate it.

I was half right.

It was huge/overwhelming, packed to the marble rafters with impolite tourists and loaded with art that doesn’t speak to my soul. But there were things to love.

For instance, I loved the grand architecture of the Louvre itself. Soaring, classical, warm, thoughtful. Impeccably maintained and rather clean, even. Despite the hordes of photographing masses, it didn’t seem that crowded.

For the most part, I was bored by the art. I just don’t like Renaissance, medieval nor antiquities. If you do, then this is the place for you. I can’t quite find the joy in stabbings, beheadings, angels, crucifixions and dark, depressing colors. I have a dark sense of humor, but I like my art joyful and palpably human.

I entered through the Palais Royal section in the back rather than through the Pyramid, using my museum pass, which was a big time saver. Because I never went inside the Louvre the last time I was here, I didn’t realize that the Pyramid was functional and was basically the glass ceiling to the Louvre’s command central.

When you enter the Louvre, it’s like entering the biggest mall you’ve ever been in. Only it’s way bigger. Escalators and signs everywhere. And in the Louvre, unlike most of Paris, the escalators all work. Most of the “help” in this area is grouchy, the kind of aides who pretend not to see you if you look like you’re approaching.

Since it was early in the day, I decided to do the ugliest, “American-ist” thing possible. I made a beeline directly to the room with the Mona Lisa, not even looking at anything along the way. I knew it would be bedlam in there, and I wanted to get it over with before the afternoon crush set in. I wasn’t terribly interested in seeing the Mona Lisa, but my wonderful art instructor Roumen said I “must go.” And I figured it would be silly to be in Paris and not to see it. 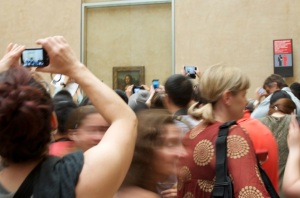 Surprisingly, there wasn’t a line to get into the room. But there was a swarm of people around her about 20 deep, most of them taking photos. Not good photos, either, since they basically had to hold their phones high up in the air to get a shot. How could they possibly take a better picture than the zillions they could find on the internet taken without interference from the teeming masses? Well, they couldn’t; it was more about “look, it’s me near the Mona Lisa,” or “hey, this is famous.” Annoying to me as a painter, because they seem to have little interest in the art itself. Despite the rules posted everywhere, many of them take photos with flashes, which damages the art. (Okay, end of the “get off my yard” grumpy rant.) I do wish there could be a special visitation of Mona for painters only.

I suppose it’s very bourgeois of me to like the Mona Lisa, but I did. I really did. Easily the finest painting I saw there. Not because it’s famous, but because it’s great. The colors were beautiful, the eyes were very alive and the subtleties were amazing. I had heard the Mona Lisa was small, but it was actually bigger than I’d expected.

Another easy, non-snobbish way to tell a great painting? You walk into a big room, filled with great paintings, and your eyes immediately go to it. Even from afar, you notice it, and think it’s wonderful.

That said, even though I appreciate its artistry, it doesn’t make my top 50 of paintings I’ve personally loved here. I’m just way more into impressionism and what has followed than into Renaissance art.  I did look at the paintings in the Italian gallery on my way out of the Mona Lisa room. The Italian Renaissance painters are way better than the French ones, and you could see Leonardo’s influence on all of them.

A very sweet aide in the “peintures” section helped me figure out where the French painters were. First he spoke in French, and after a while I had to stop him because it was beyond my comprehension level. When I finally said, “I’m sorry, but do you speak English?,” he apologized and said he thought I “wanted to practice my French.” So much for my accent not giving me away! He then gave me a lot of information in flawless English.

I forgot that the second floor here is the third floor, American. So I missed a floor of French paintings. Supposedly they have a few Monets, but not many. All I saw was Delacroix and his amies.  Zero Klimt. Guess there’s one in the D’Orsay, but I was told it was under renovation, and I could not see it.  I love Klimt. The guide in the Louvre said if I want to see Klimt, I’ll have to go to Vienna or New York.

My patience with being jostled is running thin, so I split from the Denon wing and head over to the Richelieu to see Napoleon’s apartments. (Btw, if you’re going, each of the wings are a separate fee for entry unless you have the Museum Pass, which I recommend if you hate waiting in lines. More info here, http://en.parismuseumpass.com)

I do enjoy Napoleon’s apartment suites at the Louvre. Ostentatious beyond belief, with beautiful fabrics and colors. Living like that, hard to believe he wasn’t overthrown or beheaded. I was amused by the teeny tiny bed and the little chair with the huge rug with the seal. In my head, I’m now picturing Napoleon as an elf. I didn’t get the audio tour, but I think that the rooms are recreations.

This section of the Louvre wasn’t crowded at all, adding to my ability to pause for a bit, think about it and enjoy it. There were still some “I was here!” photographers. Also what I call “the catalogers.” They go into every room with their iPad camera, hold it up, “click,” then move on, never  even looking at the art or display. Ut-oh, the grumpy rant crept back in. You’d have to see what I’m talking about to truly appreciate how annoying it is. I have bruises from all the elbowing.

Winged Victory. Up high enough to shoot without seeing the throng below.

Detail in the Denon wing.

Stairwell in the Richelieu

Detail of architecture at the Louvre.

You really don’t see a lot of dog sculptures here.

Peaceful landing in the Richelieu. 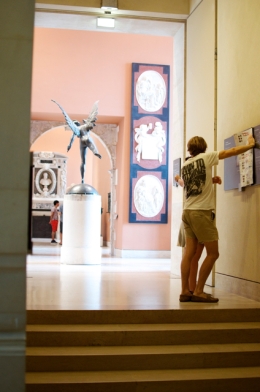 Hallway in the Object d’Arts section.

Amazing tapestry I saw while getting lost on the way to Napoleon’s suite. Look at the detail! 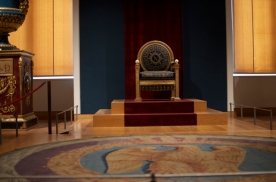 Hallway after hallway of opulence.

Evidently Napoleon was into match-matchy.

Guess this was the “modest” alcove.

Closeup of the luscious velvet and gilding. 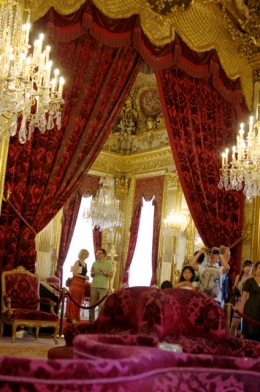 Doors in the Richelieu.

2 thoughts on “The Louvre”