Today it was a little cooler, so I headed to the park and painted for a few hours in the morning. There I ran into a gross guy who plopped down on the bench next to me, smoking a cigar. In a park. Really, dude? Normally I’d move, but I’d already started the painting.

I’m not sure the French smoking ban is all that great. People can still smoke outdoors and in the outside tables at restaurants. And since most restaurants in Paris are open-air right now, not to mention it’s hotter than hell inside most restaurants, you will inevitably end up eating your meal with smoke in your face. I’ve decided not to get bothered by it. But cigar smoke makes me choke. Sorry, Paris, I might have coughed pointedly to make the cigar smoker feel bad. Of course it made no difference.

At the park, I did a nominally better painting than I did last time. I learned it’s essential not to just pick something that’s pretty, but I need to be mindful of having a subject matter for the painting. I thought it would be the buildings, but due to the way I framed it, the subject was inevitably a statue, which is not something I wanted to paint. Statues are already works of art.

While I was painting, I once again got to converse with children in French. This time, two boys, I’m guessing around age five. They brought their toy cars over, drove them all over the bench and my supplies. They asked to see my painting, and very sweetly, one of them said, “Tres beaux!” The other one started grabbing my pastels, which I didn’t think was a great idea since they’re super messy and then he’d have paint on his clothes. Since I didn’t know how to say “don’t touch those” in French, I grabbed his hand gently and tried to wipe it off. He then shrieked as if I was trying to abduct him. Evidently he does that a lot, since nobody came running. In fact, they came over several times and I never could determine who was their mother or nanny. They kept asking me things which I didn’t understand. I felt bad; I hate being rude to children. But I explained I did not speak French, and they continued, so what was I to do?

I finally remember the French word for car, so I told them their voitures were also (osi) beaux. They ran off. I thought when they returned, I would ask if they were brothers or friends, since that is within my limited French vocabulary. But they never returned. As I painted, I wondered why all the French goes out of my head when I am suddenly confronted with conversing. Panic syndrome, perhaps? I’ve gotten pretty good at asking for directions and navigating purchases for the most part.

After the park, I change and head out to the Saint Martin Canal in my district, hoping to take advantage of the better weather. Several people had recommended it, so I grabbed my camera, eagerly thinking about getting some great photos.

Well, it didn’t happen. The Canal is nothing to write home about. In fact, it’s less than mediocre. It’s ugly and industrial-looking, and it doesn’t appear to even be in a nice neighborhood. The water looks super polluted. Think Saginaw river with some extra coke tar piles and a drunken college boy passed out on the pier. Yuck; I left. I won’t be back. The Metro line, 7b, though, was the coolest one I’ve been on. Turquoise and orange, very retro. It’s also the only one I’ve seen pull into the station early and just sit for several minutes, waiting.

I go home, shower again and change, read some restaurant reviews. The sushi restaurant in the Marais is already closed for the summer holiday. So bizarre, but I guess many restaurants do that here. So I decide on Chez Michel, which was highly reviewed and only a few blocks from my apartment. They also close for the month of August, so I figure now or never.

It really doesn’t look like much, and the prices were higher than I’d hoped for, partly because they only serve a 3-part plate, no separate entrees or dinners. (Entrees means appetizers in Paris.) The whitefish ceviche with cucumber, onion, lime and avocado was wonderful, and my tuna dinner with zucchini was also very good, although the fresh zucchini I was expecting was actually almost a curry dish. Service was quite friendly and attentive, and very good English was spoken by both servers. I had to smile because the waiter made a special point to make sure I understood the tuna would be pink inside, probably thinking that us American rubes overcook everything. Can’t remember the last time I had tuna done medium, come to think of it. 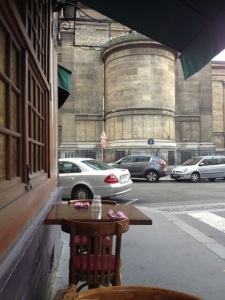 Street view from outside at Chez Michel

As I await my dessert, I sit for a while and contemplate the Paris light. Everything looks spectacular around 8:30 pm right now. The colors are soft and pop. And it’s almost as if a tiny haze covers everything, giving it atmosphere. And I think, maybe that’s just my romantic spin on pollution. By 9:15, the magic light is over until it gets dark. Then the city glows a soft amber because of all the street lights. I observe a few examples of French driving. A guy parallel parks, severely tapping the car behind him, even moving it a few inches. He gets out of his car and doesn’t even look to see if he did any damage. And another woman parks right in the crosswalk, wow. If it were Royal Oak, she’d have gotten a ticket, but it doesn’t appear that parking enforcement is too active here. Maybe because there are no parking meters on the street.

To-die-for dessert at Chez Michel. Okay; I’ll admit, I took a bite or two before I thought to photograph it.

Finally, came the dessert. The strawberry millefleurs, as suggested by the very sweet waitress. It was easily the best dessert I’ve had in Paris. Very sophisticated blend of flavors … strawberries, a shortbread-type layer that was sort of a cross between a biscotti and a croissant in texture, stiff cream whipped with mascarpone, mint leaves, some sort of darkly flavored indian herb and a golden honey sauce flavored with “spices,” according to the waiter. Apparently Chef Michel was playing it close to the vest with his special ingredients. I don’t blame him. That sauce made the dish. If I had to guess, I’d say the honey was flavored with anise. It was truly inventive and amazing. I ended up smiling, ear to ear. Perfection has a way of making me happy. Unfortunately you can’t just drop in for dessert at Chez Michel, so you’ll have to have the full dinner to experience the strawberry millefleurs. Well, dinner was also very good, so I think it was worth it.

Another charming little Parisian custom:  if you’re a woman and you’re eating outside alone, men will walk by, smile and say “bon appetit” to you. Happened four times tonight. French men rock.

2 thoughts on “Painting in the park, smoking, Canal Saint-Martin, dinner at Chez Michel”