I am pleased to see that the Museum of Modern Art has late hours on Thursday. Until 10 pm. Late nights at museums are generally less crowded. Plus it’s something to do at night which I won’t have to do alone.

I spiff myself up a little and head over. So far, I’ve refused to go to the museums looking like a slob. Seems to me, museums are something to celebrate and respect. Maybe it’s because we have so few where I live.

When I get there, there’s a long line to get in. First really long line I’ve had to wait in at a museum since I got here, thanks to my museum pass. I wish it hadn’t expired, then I remember, it isn’t valid for the Museum of Modern Art, because the permanent collections are free. And it doesn’t work for special exhibits.

After standing in the line for about 20 minutes, a guard comes out and shouts something at us in French. I can’t follow it, but a bunch of people leave. About half of them stay, and the line shortens immediately. This is a big down side of not knowing that much French. I don’t understand things like announcements, and sometimes I can’t read the signs. I overhear some girls nearby chatting in English and gather that I’m standing in the line for the Keith Haring exhibit, which I didn’t know. God only knows where the entrance is for the permanent collections. I asked two people at the museum who supposedly spoke English and had no idea what they said. The Museum of Modern Art adjoins Palais Tokyo, another large museum, so it’s pretty confusing. Lots of signs and entrances.

The guard’s announcement had been that he didn’t think we’d be able to get into see Keith Haring; the line was too long. At this point, it’s about 8 pm. I figure WTH, and decide to stick it out. I make it into the exhibit at about 8:30.

Entrance to the exhibition. Packed.

The second I enter the room, I am blown away. First of all, the exhibit is massive. I had no idea Haring had been so prolific. There is room after room after room of his work, and when you see it in total, it makes such a powerful statement.

Also, most of the artwork itself is huge. A client and a friend has an original Keith Haring piece in his office, and I thought that was the usual scale of Haring’s work. Wrong. He normally worked on gigantic tarps; probably a comfortable transition from his origins as a graffiti artist. He also had a thing against canvas; thought it came with too many expectations.

I’d estimate the average size of the major works to be 20 ft. x 20 ft. And they’re also mostly very colorful. So when you start putting all those works together, you can imagine the impact. One side benefit to this is that, though the exhibit is crowded, you can still see the artwork pretty well. 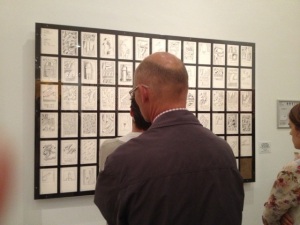 One of the first things I see is a wall of penis sketches he did. They are very amusing, and I stand there for a while and read the subtitles. Maybe 100 sketches, notebook size, with the little fringe from the notebook spirals still on them. Kind of reminds me of roughs we do for ads. Fun!

Then I start moving my way through the rest of the exhibit, and I realize why he’s such a hero to many gays. His work is so activist. It’s like he was Nelson Mandela, speaking through his art, and saying “my people are under attack here; it’s wrong, set them free.” As with all artists, certain themes emerge. The dogs attacking. Religious hypocrisy about gays. People punching right through a hollow middle. Bodies stacked up, concentration-camp style. Gays being treated mistreated, acted and ignored like they don’t exist. Painting after painting after painting about it, all filled with such emotion. There are even giant vases that Haring covered with hieroglyphics that reflect the struggle. There were so many amazing works, I couldn’t photograph them all, so these are only the ones that were photograph-able and which I found the most meaningful.

I feel moved, depressed, enraged and sad. I have to sit down for a while to take a series in. And it’s weird, but I also feel joy about the work. Somehow it is filled with hope, too. Looking at the exhibit packed with almost all French people, judging by the language I overhear, I suddenly feel very proud that Haring was an American.

I move out of his early to mid-80s work and into the middle period. This is full of experimentation. There are statements against greed, racism and a really unusual section of work that can only be seen with black light. There’s one of Warhol that is particularly fascinating.

I find myself wishing Haring had titled his work. I think it would have added something to works, since many of them are quite similar. He rarely did, though. Don’t think I saw a single one with a title, which makes it hard to identify which one you are talking about or to look it up. Another reason I snapped more photos of the artwork than I normally would.

There are also some videos of Haring working and some short films he did. And a little row of Polaroids of him with various celebrities. It’s not that often that artists are famous and appreciated in their own time, but he was. I can only imagine that pressure that created for him.

I then enter his final period, once he has been diagnosed with HIV. It is a period that is all too short, sadly. Having worked with an AIDS organization for many years, I find this section so compelling. It’s a transition in his work from messages about gays to the general public to one that is more inside. Messages to his own community. The colors are warmer and softer for the most part. There is one where the colors were so soft, I was unable to photograph it, but the messages were all about not putting your head in the sand. I sit down here for a while and reflect about what Haring might have done if he hadn’t died from AIDS. I feel profoundly sad that had he been diagnosed with HIV ten years later, he might still be with us. I wonder how he’d feel about the progress that has been made in the gay rights struggle in America over the last 10 years.

It was a great show. Kudos to Paris for pulling together such a thorough and thoughtful exhibit. I thought it would be good, but it was so much more than I’d expected. In fact, I couldn’t go right back to the apartment afterward. I wandered into a neighborhood bar and had a good stiff drink, while I decompressed.

Now it is the morning after, and I feel like I have a Haring hangover. Leftover sadness. But also, still stardust in my eyes. 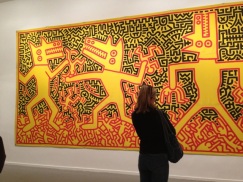 Entrance to the exhibition. Packed. 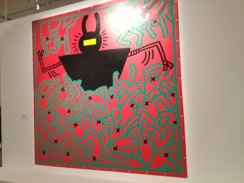 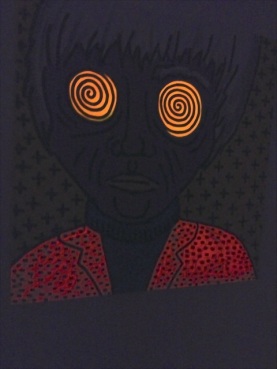 Black light work. Hard to capture on an iPhone.

Black light work. Hard to capture on an iPhone. 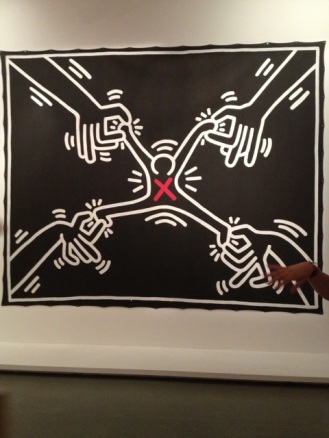